In all her years in congress Elizabeth Warren introduced 110 bills.  2 passed.

Bernie Sanders is truly special. He never held a job until he was finally elected mayor at age 53.He lived off of welfare and four different women, had a child out-of-wedlock with one and the three marriages did not work out.

In all his years in the Senate, he introduced 364 bills. 3 passed. Two of those were to name post offices.

If you want to know what kind of leader Bernie is, Go to Wikipedia, it’s a long report.

The following is condensed:  Bernie Sanders’ father was a high school drop-out, who tormented his family with rants about their financial problems.He blamed society and economic inequality for his plight, though as a white male in a middle class neighborhood, he was hardly among the down trodden.

This was Bernie’s inspiration to take up the cause of economic justice, though he would spend half of his life as an able-bodied college graduate living off of unemployment checks, and the women in his life, between odd jobs.By his own admission, Bernie was not a great student, starting at Brooklyn College and transferring to Univ. of Chicago, but his enrollment kept him protected from the draft.

He joined socialist organizations and dabbled in far-left communist politics, gaining national notoriety by petitioning the school to let students have sex in the dormitories. This was before birth control and abortion were legal, when there were still very serious repercussions for women if the condom broke, but that didn’t stop him from crusading against those silly rules that were an obstacle to his own satisfaction.

He participated in the 1963 March on Washington, a few demonstrations, and was arrested once, but his activism for civil rights ended when he became obsessed with socialism.  NOT “democratic socialism”, but oppressive far-left Marxism.

Bernie married his college sweetheart, Deborah Shilling, and spent his small inheritance on a summer home in Vermont on 85 acres. The shack had a dirt floor and no electricity, maintaining his proletariat credibility, but not impressing his new bride. He refused to get a steady job, so his wife didn’t stick around long, divorced after 18 months.

The Vietnam war was escalating, and when the next draft was announced, Bernie applied for a conscientious objector deferment.His deferment was denied, so he dodged the draft by having a kid out of wedlock in 1969 with his new girlfriend, Susan Mott, even though he STILL wasn’t working, and had no way to support the child.  By the time his draft number came up, he was too old to be drafted anyway.

He continued to subsist on odd carpentry jobs and unemployment checks, and occasionally selling $15 articles, including the one about how women fantasize about gang rape  He still refused to get a steady job to support his child. His girlfriend left him.

In 1988 he married Jane Driscoll, and took a cold-war era honeymoon in communist USSR. His new wife supported Bernie financially through his many attempts to win a public office, and shared his radical leftist political views. They visited the pro-Soviet Sandinista Government in Nicaragua known for their human rights violations, support for anti-American terrorists, and the imprisonment and exile of opponents.

Bernie blindly overlooked the carnage to stand with fellow socialists. They traveled to Cuba in hopes of meeting Bernie’s hero Fidel Castro, but access to him was denied.  Bernie Sanders managed not to hold a full-time job his entire life or vote in a single election, until he finally ran for Mayor of Burlington at the age of 40.After several failed elections, he finally won the office of Mayor of Burlington, VT, and eventually a Senate seat, which he has managed to keep off and on.

For all of his years representing Vermont, Bernie Sanders passed a total of three bills, and two of them were for naming post offices. He’s a draft-dodging deadbeat dad, a globe-trotting communist dilettante, and a petulant detractor of hard-working honorable Democrats.

His one skill is yelling about how unfair the world is, and how everything SHOULD be. But he has no plans for how to make it happen, and no idea what goes on in the rest of the world or how to deal with problems overseas.His excuse for not having a foreign policy or national security plank on his platform: “I’ve only been campaigning for three months.”

His socialist friends are bitter about what they see as a betrayal of their values by Bernie’s pursuit of the Democratic nomination.His former wife and girlfriend run when they see reporters and will not speak to the press. Bernie’s past, including a brief stint living in a kibbutz in Israel is cloaked in secrecy. (It worked for B Hussein Obama.)

Former employees and coworkers describe him as hostile and belligerent. All of the Democrats in Vermont’s government endorsed Hillary Clinton. The people who know Bernie best cannot stand him.  His supporters cannot explain how he is qualified to be president. As for his detractors, we can only watch in horror as this Nader 2.0 works an appalling act of sabotage on the Democratic Party.

Bernie Sanders was born in September 1941. 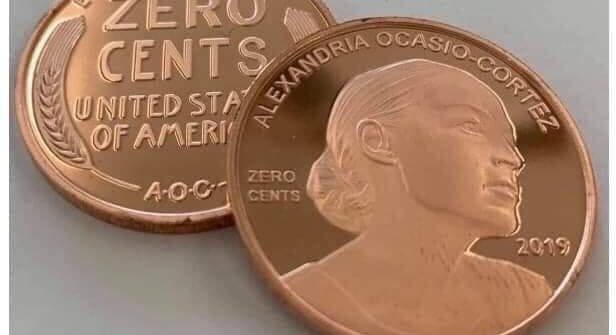 No matter what you do with this collectible piece of political history, you’ll have a good laugh at AOC’s colossal stupidity. “Pay” it to a liberal instead of a real penny! Or better yet, keep it as a funny keepsake or give it as a gift. 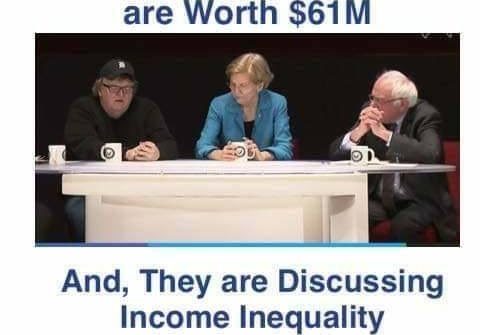 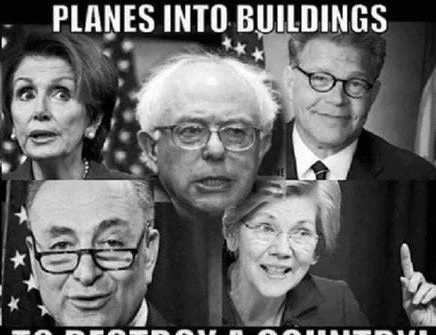